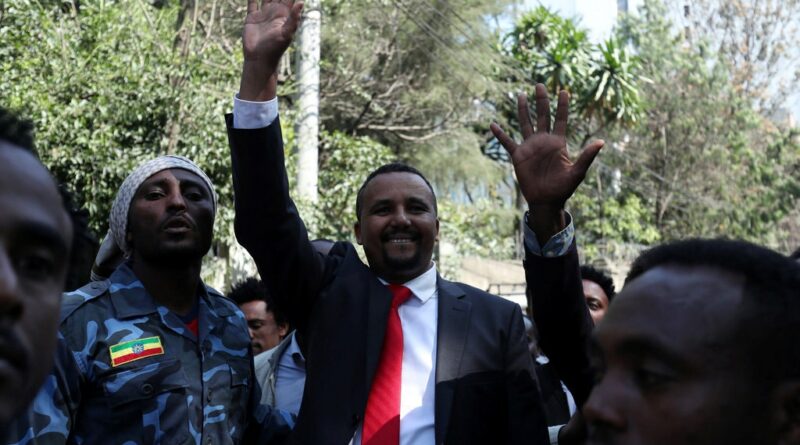 ADAMA, Ethiopia — Not long after security forces tried to arrest him in the middle of the night, Jawar Mohammed, a media baron and one of Ethiopia’s most prominent political activists, found himself face to face with Prime Minister Abiy Ahmed, the man whose government ordered his arrest.

Sitting at a table in a state conference room in the capital, Addis Ababa, the two men met on Nov. 3 to talk about preventing more of the ethnic violence that erupted in October after Mr. Jawar’s supporters began protesting his botched arrest. Eighty-six people died in two days.

Since the bloody protests, the two men have agreed to tone down the violence, and Mr. Jawar has announced plans to take his case to the ballot box. He intends to run in next year’s elections to unseat Mr. Abiy, his one-time ally.

Mr. Abiy, who became prime minister only last year, was awarded the Nobel Peace Prize last month for his efforts to end Ethiopia’s long-running war with Eritrea and to bring greater political and economic freedoms to a country that had suffered decades of repression.

But the ethnic tensions that have torn this country apart in the past have resurfaced in recent months, and the clashes in October were the deadliest since Mr. Abiy came to power. The violence has tested Mr. Abiy’s claim to be a new kind of leader who can unify the country and usher in a new era of political freedom.

His efforts to reform the country have empowered the opposition — including Mr. Jawar and his followers — and set loose “centrifugal forces from the inside,” said Tobias Hagmann, a political scientist and expert on Ethiopia at Roskilde University in Denmark.

“He has all this discourse about national unity, reconciliation and forgiveness, but at the same time, things are happening in the streets, and politics is up for grabs,” Mr. Hagmann said.

In Mr. Abiy’s first months in office, he lifted the state of emergency, freed political prisoners, legalized opposition groups that had been outlawed, and dismissed military and civilian leaders suspected of corruption. The country breathed a sigh of relief.

A signature initiative of Mr. Abiy has been trying to persuade his fellow citizens to subordinate their ethnic identities to a national one. But Mr. Jawar and his allies say they want a government that respects their demands for greater regional sovereignty.

Ethiopia has nine semiautonomous regions, where ethnic conflict is rampant and groups that have been newly empowered by the recent democratic overhaul are demanding the ability to run their own affairs.

One ethnic group — the Sidama — is seeking to create a 10th semiautonomous region. A referendum that would decide the matter is scheduled for Wednesday, and there are fears that the vote could descend into further violence.

Mr. Jawar said he would run for a parliamentary seat in Oromia, a sprawling region of about 30 million mostly rural dwellers, consisting of dozens of different ethnic groups. His aim is to create a political party there with the goal of winning enough seats to name him prime minister.

His Oromia Media Network, which has over a million followers on Facebook, gives him a powerful platform to sway voters, and he has proved his ability to mobilize his supporters.

“I will contest and I will challenge him,” Mr. Jawar said of Mr. Abiy in an interview. “And I will defeat him, there is no question about it.”

When Mr. Jawar alerted his followers on Oct. 23 that there was a plan to arrest or possibly kill him at his house in Addis Ababa, they came out in force to support him.

The violence that resulted was particularly deadly in Adama, a city in Oromia about 60 miles east of Addis Ababa. According to hospital records, 17 people died in the city.

Thousands of supporters of Mr. Jawar, many belonging to his Oromo ethnic group, marched through the streets of Adama, and as they began to block roads, a separate group of people, many from different ethnic groups, confronted them. Both sides were armed with machetes, knives and pistols, and deadly clashes ensued. Government security forces shot and killed at least 10 protesters.

“This is a city of many nationalities where many people live. So when one group comes and starts protesting, I also wanted to defend myself,” said Said, 34, an Adama resident and a member of the Amhara Democratic Party, which advocates the rights of the Amhara ethnic group. “That self-defense later on turned into an offensive on our side,” he added. Said asked to be identified using just his first name because he feared reprisals.

Mr. Jawar has not only shown that he can mobilize people to take to the streets but also that he can get them to return to their homes.

On the second day of the protests, Mr. Jawar held a news conference and called for an end to the violence. “Open the blocked roads, clean the towns of barricades, treat those who have been injured during the protests and reconcile with those you have quarreled with,” he told his supporters.

But Mr. Jawar’s prospects for electoral success are uncertain.

One major stumbling block: Because Mr. Jawar has dual American citizenship, he isn’t yet eligible to run for office in Ethiopia. In fact, he announced his candidacy in Minneapolis, an American city with a large community of Ethiopian immigrants.

Mr. Jawar used to support Mr. Abiy, deploying his social media power to help him get elected prime minister in the country of 105 million people.

But now, Mr. Jawar and his Oromo followers accuse the prime minister of hypocrisy. While Mr. Abiy has lifted restrictions that once silenced government critics, released some political prisoners and removed some groups from terrorists lists, the prime minister is still engaged in oppressive tactics, Mr. Jawar said.

Dozens of offices of one political organization that was removed from a terrorist list — the Oromo Liberation Front — have been shut down and thousands of its supporters taken to detention centers in the past year and a half, according to the group’s leader, Dawud Ibsa, and to some human rights groups in Ethiopia.

In addition to greater regional autonomy, Mr. Jawar said he wanted an end to what he described as politically motivated arrests.

In an interview at his heavily guarded office in Addis Ababa about a week after the protests, Mr. Jawar said that he had wanted to remain supportive of the prime minister, “with me managing the Oromo people for him so he can focus on federal issues.”

A spokeswoman for the prime minister declined to comment on Mr. Jawar’s election plans. But at a news conference on Nov. 3, Mr. Abiy said he would continue to implement his vision for Ethiopia.

“We have to stop those forces pulling us back two steps while we are moving one step forward,” he said.

Like Mr. Jawar, Mr. Abiy is Oromo, but the prime minister has downplayed his ethnicity as part of his efforts to unify the country. And Mr. Abiy’s support comes from a wide variety of ethnic backgrounds who want to see a more modern, progressive country and who support his moves to diversify Ethiopia’s agricultural economy.

Mr. Abiy’s critics, including Mr. Jawar, had been holding talks with Mr. Abiy to try to reach a power-sharing agreement that could allow them to have a voice in government even though they lack seats in Parliament. It’s unclear how Mr. Jawar’s candidacy would affect those talks, but he said he would like to continue them.

The prime minister has also been holding talks with the four ethnic-driven parties that make up his governing coalition: the Oromo Democratic Party, the Amhara Democratic Party, the Tigray People’s Liberation Front and the Southern Ethiopian People’s Democratic Movement. On Sunday, Mr. Abiy said that talks had advanced to merge the parties, though it was unclear if the Tigray group had agreed. The merger could help avert further ethnic violence.

“Abiy and his comrades rode Oromo nationalism to come to power. Now he is ignoring it,” said Getachew Reda, an executive member of the Tigray People’s Liberation Front. “I don’t think that is a working formula. You have to give them a voice.”

In the aftermath of last month’s violence, Mr. Abiy’s popularity has suffered, his rivals and analysts say, and regular Ethiopians have expressed concern that the unrest could signal the start of more widespread ethnic fighting.

Just days after the protests, Mr. Abiy was greeted with boos from hundreds of protesters when he visited Ambo, a town in Oromia that has been a hotbed of antigovernment protests for years.