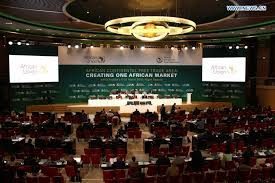 Kigali – Africans don’t do much business with each other. Only 16% of the trade in the continent is with itself, the rest is with the outside.

See, for instance, transport. Sometimes flying to a neighbouring country involves a detour to Europe, and many roads and railways are pretty bad too.

When the roads do work, border crossings can be slow, and there are tales of trucks taking a day or more to get through these due to red tape.

Also, getting visas to travel to neighbouring countries can be like pulling teeth because of bureaucracy and often also because of corrupt officials.

On Wednesday leaders of African Union member states signed the African Continental Free Trade Area (AfCFTA) agreement at an extraordinary summit in Kigali, in a hope to fix these problems.

Heads of government agreed on the principle in 2012, and negotiations started in 2015.

The signing of the agreement – 44 out of the 55 AU member states signed, with big ones like South Africa and Nigeria holding out for more consultations in their respective countries – marks the first stage in the implementation, which could take another decade. Small print doesn’t sort itself out overnight.

President Cyril Ramaphosa said this week’s summit was a “historic moment which was dreamt of by the founding fathers of the AU”.

Africa will be a country of sorts

The AfCFTA promises to bring together a market of 1.2 billion people, the population on the entire continent, with a combined gross domestic product of more than $2 trillion.

Traders won’t pay tariffs on 90% of goods, while 10% of “sensitive items” will be phased in later.

People will be allowed to move across borders without having to apply for visas, something which already happens in most regions. In East Africa and West Africa, for instance, only a national identity card is needed to travel.

There could even be a single currency one day.

This could take a while, however, as only 27 countries signed the Protocol on the Free Movement of People. Terrorism and xenophobia are hurdles, but countries like Rwanda already offer visas on arrival, while Ghana already offers free entry to African citizens.

With the rise of virtual currencies like Bitcoin, especially in countries with currency problems like Zimbabwe, businesspeople gathering at a business forum as part of the free trade summit in Kigali on Tuesday, said this kind of single currency could happen sooner than a real, paper currency.

It will be good for women traders

The AfCFTA is one of the flagship projects of Agenda 2063, launched by the first woman chairperson of the African Union Commission, Nkosazana Dlamini Zuma. It makes sense that women should benefit.

Vera Songwe, United Nations Under-Secretary-General, told the summit that more than two-thirds of the cross-border traders on the continent are women. They currently face “considerable challenges and risks, harassment and abuse, because they operate principally through informal trading networks”.

The AfCFTA will simplify the trading regime and create a better environment for these women to trade.

Exports to countries outside the continent is mostly made up of capital-intensive goods, like petroleum fuels and extrated minerals  – not much employment opportunities here.

Trade between African countries is different, Songwe said. “It is far more labour intensive. Manufactured goods account for 42% of intra-African exports, compared to just 14% for exports to outside the continent,” she said.

Manufacturing creates jobs, as well as the delivery of services, which make up just under 60% of African GDP and which will grow if suppliers have access “to all the markets of all African countries on the same terms as if they were domestic suppliers”, Songwe said.

The global economy is changing, and in the developed world there is more protectionism and anti-globalisation, which will affect Africa too.

The AfCFTA could help Africa weather, for instance, America raising its steel and aluminium tariffs, Songwe said. Africa currently exports $800 million of such to the United States.

The US has also threatened to revoke AGOA preferences – worth $450 million – for several East African countries because these countries plan to reduce imports of second-hand clothing from the US due to an industrialisation plan.

“Collectively, we can wield the strength of the African continent better than we can individually. At a time when the global trading system seems so uncertain, it is just common sense for us to look at the opportunities closer to home.”