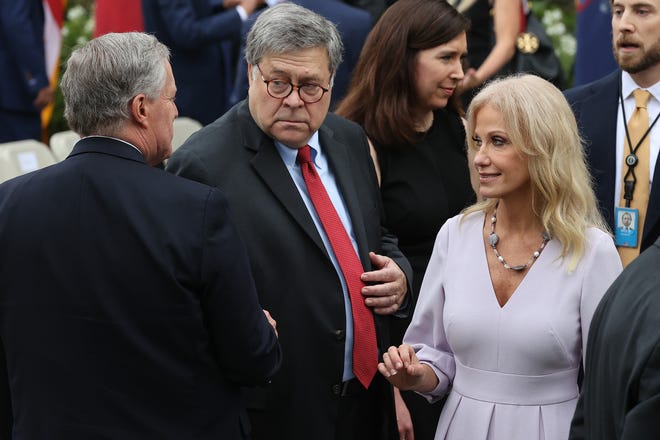 Since this week’s back-to-back announcements that President Donald Trump and his adviser Hope Hicks have tested positive for coronavirus, at least nine other people who were in close contact with them have shared similar results.

Barrett had tested positive for COVID this summer and has since recovered.

Videos and photos of that event, which was held outside in the Rose Garden, show more than 180 people in attendance, with only about 50 wearing masks and few practicing social distancing.

In one video, Lee, who disclosed his positive test result on Friday, is seen hugging at least two other attendees, and other images show guests shaking hands and chatting in close proximity. Lee appears to have been seated directly behind Vice President Mike Pence at the event. Tillis was seated directly behind U.S. Attorney General William Barr.

Guests mingled outside in the Rose Garden as well as at receptions held inside the White House. Masks were not required at any of the events.

Not at the Rose Garden but also testing positive this week was Ronna McDaniel, the Republican National Committee chairwoman who attended the presidential debate on Tuesday in Cleveland, and two other White House reporters.

“There’s probably several super spreader events mixed up in this one scenario,” said Susie Welty, a contact tracing expert and technical director of surveillance at the University of California, San Francisco.

Welty said the number of people Trump and Hicks exposed to the virus could have expanded well beyond the circle of close contacts. The pair attended several events over the past week drawing thousands of people. The list includes his top advisers, his campaign donors, his Democratic rival Joe Biden, and scores of his supporters.

Biden tested negative for the virus on Friday, as did several other people who have been in contact with Trump or Hicks, such as Pence. But Welty and other experts noted that the incubation period for the virus is up to 14 days, so those negative results do not mean they are in the clear.