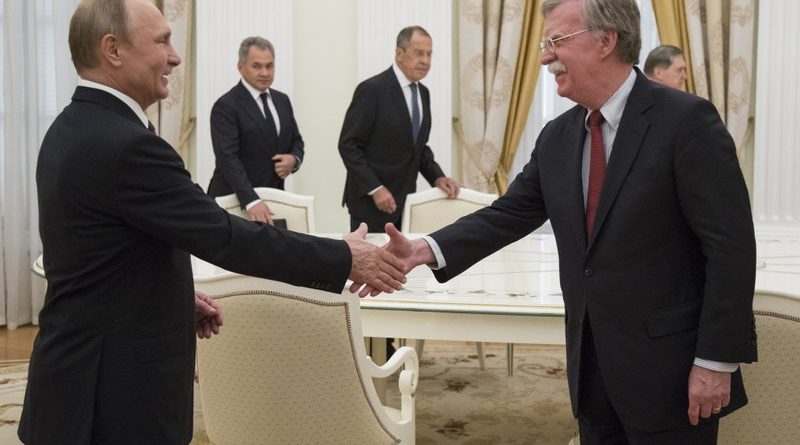 MOSCOW (AP) — A summit that brings together Russian President Vladimir Putin and U.S. President Donald Trump will be a success in itself regardless of the results, Trump’s national security adviser said Wednesday while in Moscow to lay the groundwork for the meeting.

National Security Adviser John Bolton said the Kremlin and the White House would jointly announce the date and location of a Trump-Putin summit Thursday, but disclosed the event would be held in neither Russia nor the United States.

Trump told reporters he’ll probably be meeting with Putin during a July trip to Europe. He mentioned Helsinki, Finland and Vienna, Austria as possible venues, adding that he would be receiving an update from Bolton.

“I think the fact of the summit itself is a deliverable,” Bolton said after talks with Putin and other Russian officials. “There are a lot of issues to talk about that have accumulated, and I think this was one of the reasons why President Trump believed so strongly that it was time to have this kind of meeting. And as you can see, President Putin agreed.”

The summit would offer Putin a chance to try to persuade Washington to lift some of the sanctions imposed on Russia over its annexation of Crimea, interference in eastern Ukraine’s separatist fighting and alleged meddling in the 2016 U.S. presidential election.

The Russian leader had two brief meetings with Trump on the sidelines of international summits last year. He and Trump discussed their mutual desire for a full-fledged one-on-one summit during a March telephone call.

Planning for the meeting was delayed amid the investigations of alleged collusion between Trump’s campaign and Russia that Trump has dismissed as a “witch hunt.”

Trump has consistently called for improving relations with Russia, prompting criticism that he is willing to overlook Russian abuses. However, an array of new Russian sanctions has been imposed under his presidency.

Greeting Bolton in the Kremlin, Putin noted that U.S.-Russian relations are at a low point and offered his opinion that the poor state of bilateral affairs mostly was a function of American political infighting.

Putin said he hoped Bolton’s visit would be the start of a step up. He added that Russia never wanted a confrontation with the United States and offered to discuss what could be done to “restore full-fledged relations based on equality and mutual respect.”

Bolton replied that he was looking forward to discussing “how to improve Russia-U.S. relations and find areas where we can agree and make progress together.”

“Even in earlier days, when our countries had differences, our leaders and their advisers met,” he said. “I think that was good for both countries, good for stability in the world.”

The U.S. adviser also said he wanted to hear Putin’s account of “how you’ve handled the World Cup so successfully.”

Speaking to reporters after the talks, Putin’s foreign policy aide, Yuri Ushakov, said the summit would take place in a location “very convenient for both us and the U.S. side.” He did not name it as part of the plan for a joint declaration with Washington. l

Austria previously offered to host a Trump-Putin summit in Vienna. Some media reports have mentioned Finland’s capital, Helsinki, as a possible venue.

The summit will include one-on-one talks between the presidents along with a broader session and conclude with a joint news conference, Ushakov said. He said Trump and Putin are expected to issue a joint statement.

Ushakov described the talks with Bolton as “constructive and businesslike” and said they “brought the results we were hoping for.”

The discussions touched on the state of bilateral ties, nuclear arms control, the situation in Syria, the Ukrainian crisis, developments around North Korea and the U.S. exit from the Iranian nuclear deal — topics Ushakov said would shape the summit agenda.

He said the issue of alleged Russian meddling in the 2016 U.S. presidential election was raised during the meeting, and the Kremlin reiterated its denial of any interference with the vote.

U.S. sanctions on Russia were not discussed, he said.

Ushakov wouldn’t comment on what Russia expects from the summit, but voiced hope it would give a “strong impulse” to normalize U.S.-Russia relations and would be “this summer’s most important international event.”

Bolton was equally coy about the summit’s agenda. He noted the policy and political differences between Moscow and Washington, but underlined Trump’s strong belief that the summit will serve American interests.

“I don’t think we expect necessarily any specific outcomes or decisions,” Bolton warned, noting that “it’s important after the length of time that has gone by without a bilateral summit like this to allow them to cover all the issues they choose.”