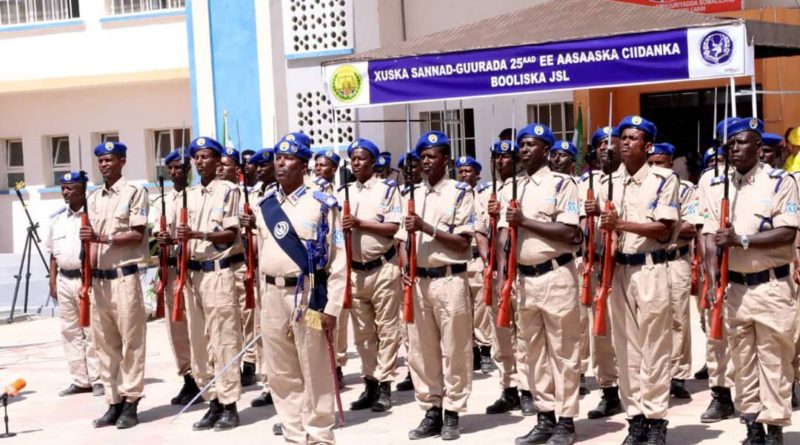 This week, Somaliland police arrested six councilors of the Gabiley district Council. They are being held at the headquarters of the Criminal Investigations Unit of the police in Hargeisa. So far, the charges against them are unknown. This morning they were arraigned at a district court in Hargeisa.

The councilors were calling for a vote of no confidence against the mayor of Gabiley, for allegation  of corruption and misappropriating of public land.But, Col. Kahin, the Interior Minister, has issued a decree banning any meetings for all Somaliland district councils.

Col. Kahin, a veteran of the liberation war, is borrowing a playbook from “Faqash” era tactics to “punish and suppress “our elected officials. Interior Ministry has no business meddling with how the local governments are conducting their own affairs. What Col. Kahin is doing is a classic example of power abuse, and he must be held accountable.

GubanMedia is calling for immediate release of the six councilors. These new round of arrests are a hugely repressive move and risk moving Somaliland into a police state and toward authoritarianism. The councilors are duly elected local officials.They  must be immediately released and if there are charges against them it must be unconditionally dropped.

The arrests are nothing more than a distraction and noise to cover the failure of Col. Kahin to effectively run the sprawling Interior Ministry, which has jurisdiction over the national security and local municipalities matters.

Instead, Col Kahin and his Interior Ministry, which is a relic of  the late vile “Faqash” government,  should concentrate on keeping the homeland safe, cracking down on terrorists and their sympathizers, and restoring law and order in the carnage of Eil-Afwein communal violence, in which some people are alleging that he is complicit in the repeated violence.

Since 1993, the Ministry of interior has been having unchecked power to bully the local governments. The constitution did not clearly set up a system of devolved authority and responsibility for the elected councils. Consequently, the Interior Ministry bureaucrats are constantly busy controlling the day to day operations of the local elected governments. To keep their jobs, most of the councilors are busy appeasing the Interior Minister or his representative, instead of serving for the people.

For example, Gabiley district or county is a large swath of land between Hargeisa and Borama, which has towns, townships, villages, and farms. It has four major towns: Wajaale, Gabiley, Alleybadey and Arabsiyo.The electorate of the district elect 21 councilors, who conduct the district’s business in Gabiley, the largest town of the district.

To better serve and to bring government closer to the people, each town of Gabiley district should have its own elected district council, including a directly elected mayor and maybe (2-3) councilors by the voters. The councils must operate as government authorities with responsibility to run the affairs, the interests, and the needs of the people that live in the council Jurisdictions areas.

Moreover, Wajaale is a vast growing town: It’s a trading place, a logistical hub and the gateway connecting Somaliland to Ethiopia.Despite all of that, it does not have a district council or elected mayor and council.

Wajaale, Arabsiyo and Alleybadey, are among the largest towns  in Gabiley district  deserve to have district councils  more than other small, rural villages  in other regions the Interior Ministry declared as district councils. But in today’s Somaliland the way to have leverage on the government is through “Violence and the threat of using violence” or mob rule

The residents of Gabiley have been used as a  vote bank by unscrupulous politicians like Abeeb Time-Ade and others during the election cycles, for their parochial interests. In return, their pressing issues have been ignored repeatedly by all respective Somaliland administrations election after election. In 2017 election, without the votes of Gabiley, Bihi would not have become the 5th president of Somaliland.

We should reform how we evaluate and run our municipalities and regions because what we have now is chaos.

The constitution in vague terms specifies that the district councils are responsible to deliver basic services: water, electricity, education, healthcare and even public safety and communications. But up to now, no district council in Somaliland is serving its people those services because the central government is afraid to lose power.

The closer local governments are to the people, the more effective and efficient in delivering services. The central government should share power with district councils. The legislature should also pass laws defining the devolving power of the district council in urban and rural areas.

Finally, we should reign in the power of the Ministry Interior, to issue decrees, suspend, dismiss or even arrest duly elected councilors because Somaliland was born out of the struggle against an unresponsive, authoritarian regime. Our people deserve a tentative and more accountable government based on the rule of law.

Covering the Horn of Africa