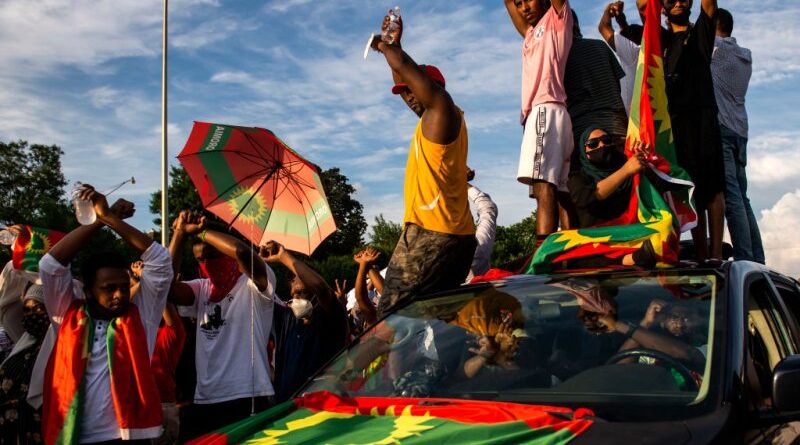 Demonstrators hold up a crossed-arms gesture during a protest after the death of musician and activist Hachalu Hundessa on the westbound lane of Interstate 94 on July 1, 2020 in St Paul, Minnesota. Hundessa was shot and killed in Addis Ababa, Ethiopia on June 29, which has sparked ongoing protests across the globe.Getty Images
Opinion
October 10, 2020 Ali Mohamed 25 Views 0 Comments

In 1984, in one of the most publicized and politically charged humanitarian crises since the Second World War, I happened to be the head of the effort to save millions from death by starvation,   as Commissioner of the Relief and Rehabilitation Commission (RRC).  The government of Ethiopia was then fixated on the tenth anniversary of the revolution. The looming catastrophe distracted the government from a well-choreographed celebration where the president of the country, Colonel Mengistu Haile Mariam, was expected to address the Ethiopian people, the world and the invited African leaders and declare  the resounding victories of the revolution,

I spoke to him many times on the looming disaster and every time he told me: “  … downplay the incident. It will pass. We have a big ceremony coming up. We shall address your concern once the celebration is over.” However, the extent of the famine was too grave to be ignored or postponed. Therefore, in March of 1984, RRC organized a donors conference and notified the world of the most painful of duties of the Commission, seeking assistance to an estimated   five million victims of famine. We appealed to them and circulated graphic documents.

In May 1984, I flew to NY and addressed the General Assembly in its First annual regular session of the Economic and Social Council ( ECOSOC):

“I appeal before you today to discharge a painful duty of informing this council and through it the entre international community that a severe drought of unprecedented magnitude has hit the whole of Ethiopia …unmatched in its severity…the dimension of human tragedy is stark and serious ……Unless the situation is salvaged and salvaged immediately….”

Nothing happened at the level and speed that we wished to get from the international community. In October 1984 I addressed again the donors conference in Addis Abeba Ghion Hotel and informed them of my visits to European capitals, US State Department and the United nations. I then reminded them of our last donors conference in March:

“In the six months that have transpired since March when we submitted our request for assistance, the figure of the victims has escalated to seven million. Every day there are additional thousands of people forced to bend in humility to destitution or death. This is to me staggering beyond belief ….a proud lot who once stood erect with their heads high now reduced to the scum of the very soil they tended and tilled profitably. What I find to be also beyond belief, appalling and even more pathetic, is the tendency in some corners to stay on the sidelines, watching as though it were a show of human tragedy.”

Immediately after that conference, in a very bold move together with the then RRC Public Relations   Director the late  Tafari Wossen and his team, we invited the BBC TV crew headed by Mikael Burke and the camera man Mohammed Amin to come and visit some places where we had severe famine problems.  We made sure that they would be granted access as visitors and  not journalists.  We sent them to Korem, the site of the shelter where we had one of the most severely affected displaced people in need of food and health assistance.

The 30-minute footage presented on October 23, 1984 on BBC   by Mikael Burke  after they left Ethiopia, shook the conscience of the world like nothing else had ever done in contemporary world history.  It undoubtedly showed the power of the press when it  presents an inconvenient truth but one that disturbs the conscience of any human being. That was what the BBC team did with the words that have since echoed in my ears a million times.  It begins with:

“Dawn, and as the sun breaks through the piercing chill of night on the plain outside Korem it lights up a biblical famine now-in the 20th century. This place, say workers here, is the closest thing to hell on earth…”

Whoever saw Buerke and Amin’s graphic and the haunting documentary  would not be able to control oneself from reacting in some ways.  As I wrote in my book Red Tears, its deliberate words and powerful phrases echoed from the skeletal frames, the desperate faces, the corpses lying in shrouds made from sacks of grain, shocking the British to their very souls. In the next week 425 international stations picked up the footage for release and the entire Western world was stunned by the hopelessness and horror captured thorough  Amin’s camera. Even the hardened staff of the BBC staff at the news room was moved to tears. In the US, NBC reported a four-minute clip taken from the BBC documentary and yet it was enough to shake up the vast majority of people who demanded their government to give immediate assistance. Children in several states went door to door asking for funds. The NGOS in the USA amassed enormous funds and volunteers to help Ethiopia. Live Aid headed by the rock band artist Bob Geldof (now Sir)  mobilized the international community through his musical ‘Do they Know It is Xmas’. In the USA almost all the major artists, including Michael Jackson, Harry Belafonte, Leone Richie, Quincy Jones, Stevie Wonders, etc., with none of the major artists left out, brought the now very famous song We Are the World  to raise funds for the people of Ethiopia.   The result was simply amazing. Books have been written about these events and readers and researchers can refer to them if they are interested to know more about the strength of the press and our faith in humanity.

In the meantime the government had a problem in its hand because once it was internationalized, the government was not able to stop the flood of reactions. That protected me and my colleagues in the RRC who had taken an extremely risky position by further dramatizing the situation and encouraging the international community to do more.

On November 4, 1984 I again addressed the UN General Assembly in New York:

“Even governments which were hitherto less than forthcoming are now following the humanitarian example of their public. We in Ethiopia are particularly touched by the good will and generosity shown by ordinary men and women. All these renews our faith in humanity, reinforces our confidence in international solidarity and indeed encourages us to try even the impossible to save the lives of our unfortunate brothers and sisters.”

In May 1985 Mengistu’s and mmy contradictory speeches in 1985 signaled that the end of me in whatever way was getting close. The international attention span is always short. Once we had all the aids we needed had arrived and the death tolls and starvation rates were decreasing, Mengistsu was ready for his anti-imperialism rhetoric.  Addressing the nation, he made no mention of the most crucial assistance we were getting from the Western countries and the United Nations. He referred to their assistance: “as a strategy of interference in Ethiopia’s affair.” He condemned them as imperialists “who pretend to sympathize with our peole  and sneer at the socialist goal for which we struggle.”

At the same time,  in  May of 1985, I was addressed once again the United Nations General Assembly (ECOSOC)  and had this to say:

“It will be recalled that a year ago, I appeared before this Council with a deep sense of frustration and helplessness. Since then an unprecedented surge of solidarity with the millions of suffering people of Ethiopia was show by large numbers of people and governments all over the world. The government of Ethiopia wishes to express its sincere appreciation and to pay a well deserved tribute to the donor governments, NGOs and UN system and the specialized agencies, and to the men and women that extended their helping hand”

It was as if Mengistu and I   belonged to two different governments.  It was clear that nothing I did could fail to get me in trouble. I continued to condemn the politicization of the humanitarian crisis and appealed to the West, mostly to USAID and US and Europe based humanitarian organizations and governments, that their focus should be saving lives and to depoliticize the ongoing operation.  But they could not resist the opportunity that this famine gave them to condemn the Soviet Union and its satellites for doing nothing except providing armaments when what the people needed was food aid. Over 95% percent of the famine relief aid came from the West and the UN whose contributors were largely Western countries. It was a classic case of trying to meet the critical human needs  in   highly politically charged humanitarian operations, the largest since the Second World War.

“If all the food delivered to Ethiopia in 1985 were packaged in 50kgs bags and placed one on top of the other, the resulting stack would be 3000 miles high. If the same bags were placed end to end they would extend halfway round the equator. The mileage covered by relief trucks and planes in 1985 was equivalent to seven trips to the moon and back “ (WHOh rep in the UN emergency office, Stephanie Simmonds)

Ethiopia is once again at a critical juncture. Its government is failing it and there is a need for the intervention of the international community to stop the carnage which has escalated to genocide and crimes against humanity. The situation may possibly  lead to an all-out civil war which will have a severe security implication for the countries in the region and beyond. And yet the world is not listening. The situation  has not yet captured the attention of the governments and the organizations that matter in preventing what is predicted from happening.  The global free press is the most powerful weapon we have at the moment, as  described above based on firsthand experience.   In that  humanitarian crisis it was the press that saved millions from dying of starvation. It was the consistent pressure on the public, the NGOs, the UN Systems and the public figures that resulted in the overwhelming responses.

In the present circumstance, world governments,  human rights organizations and the mainstream media have refused to acknowledge the critical security situation and the collapse of the country. This is mainly  because Ethiopians have not embarked on a common and coherent strategy to make their voices heard.  Social media is looked down upon with suspicion and contempt, so it will not help influence opinions or foreign policies.

The stakes are high, in human lives, in regional stability and collapse of governments in the region.  Ethiopians should be able to bring their case to the United Nations  and its judiciary branch; the International Court of Justice ( ICJ);  the International Criminal Court (ICC); the people of the world;   the media that has the monopoly of power to inform people and influence polices;  the churches, synagogues and mosques; prominent figures like artists, writers and opinion makers; and unbiased think tanks that usually give early warning signs to disasters. The early warnings are there for all to see in Ethiopia. Let Ethiopians and friends of Ethiopia respond to the alarm bell and save a country from destruction and a region from the repercussions of a failed Ethiopia.  If the world fails in this it will be a consequence of a folly with an enormous cost to all.