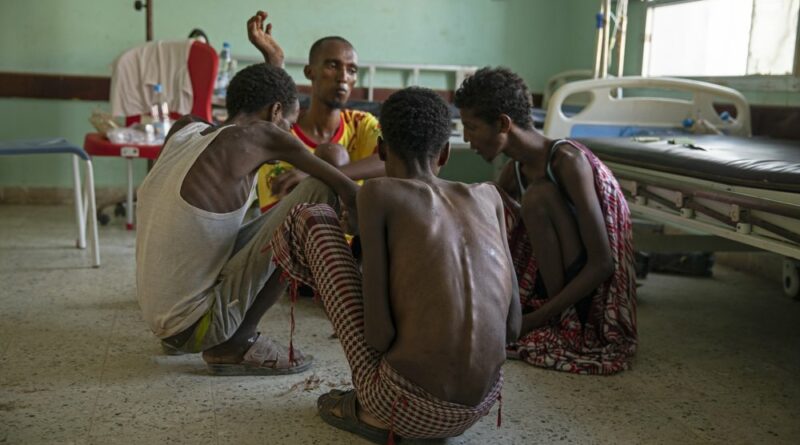 In this Aug. 1, 2019 photo, Ethiopian migrants, from center background to right, Gamal Hassan, Abdu Yassin, Mohammed Hussein, and Abdu Mohammed, who were imprisoned by traffickers for months, eat rice from a bowl on the floor, at the Ras al-Ara Hospital in Lahj, Yemen.(Photo/AP)
News
October 30, 2019 Ali Mohamed 219 Views 0 Comments

RAS AL-ARA, Yemen — Zahra struggled in the blue waters of the Gulf of Aden, grasping for the hands of fellow migrants. Hundreds of men, women and teenagers clambered out of a boat and through the surf, emerging, exhausted, on the shores of Yemen.

The 20-year-old Ethiopian saw men armed with automatic rifles waiting for them on the beach and she clenched in terror. She had heard migrants’ stories of brutal traffickers, lurking like monsters in a nightmare. They are known by the Arabic nickname Abdul-Qawi — which means Worshipper of the Strong.

“What will they do to us?” Zahra thought.

This story is part of an occasional series, “Outsourcing Migrants,” produced with the support of the Pulitzer Center on Crisis Reporting.

She and 300 other Africans had just endured six hours crammed in a wooden smuggling boat to cross the narrow strait between the Red Sea and the gulf. When they landed, the traffickers loaded them into trucks and drove them to ramshackle compounds in the desert outside the coastal village of Ras al-Ara.

There was Zahra’s answer. She was imprisoned for a month in a tin-roofed hut, broiling and hungry, ordered to call home each day to beseech her family to wire $2,000. She said she did not have family to ask for money and pleaded for her freedom.

Instead, her captors raped her. And they raped the 20 other women with her — for weeks, different men all the time.

“They used each of the girls,” she told The Associated Press. “Every night there was rape.”

With its systematic torture, Ras al-Ara is a particular hell on the arduous, 900-mile (1,400 kilometer) journey from the Horn of Africa to oil-rich Saudi Arabia. Migrants leave home on sandaled feet with dreams of escaping poverty. They trek through mountains and deserts, sandstorms and 113-degree temperatures, surviving on crumbs of bread and salty water from ancient wells.

In Djibouti, long lines of migrants descend single file down mountain slopes to the rocky coastal plain, where many lay eyes on the sea for first time and eventually board the boats. Some find their way safely across war-torn Yemen to Saudi Arabia, only to be caught and tossed back over the border. The lucky ones make it into the kingdom to earn their livings as a servants and laborers.

But others are stranded in Yemen’s nightmare — in some measure because Europe has been shutting its doors, outsourcing migrants to other countries.

The European Union began paying Libyan coast guards and militias to stop migrants there, blocking the other main route out of East Africa, through Libya and across the Mediterranean to Europe. The number of Mediterranean crossings plummeted — from 370,000 in 2016 to just over 56,000 so far this year.

Meanwhile, more than 150,000 migrants landed in Yemen in 2018, a 50% increase from the year before, according to the International Organization for Migration.

This year, more than 107,000 had arrived by the end of September, along with perhaps tens of thousands more the organization was unable to track — or who were buried in graves along the trail.

And European policies may be making the Yemen route more dangerous. Funded by the EU, Ethiopia has cracked down on migrant smugglers and intensified border controls. Arrests of known brokers have prompted migrants to turn to unreliable traffickers, taking more dangerous paths and increasing the risk of abuses.

Many of those migrants end up in Ras al-Ara.

Read the rest of the article…..