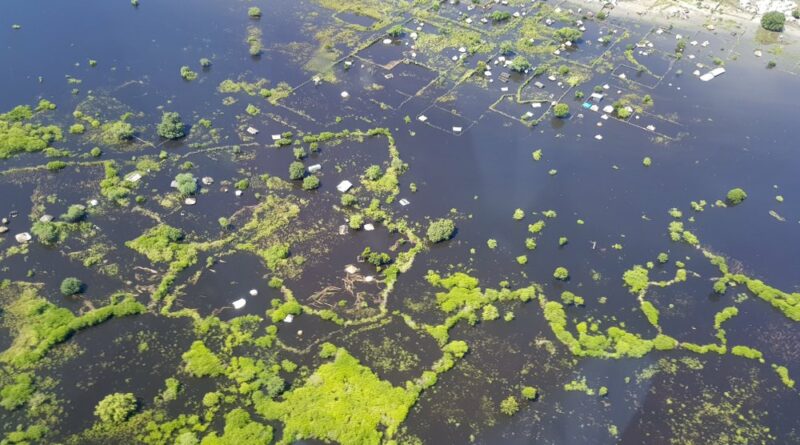 In this photo taken Sunday, Oct. 20, 2019 and released by Medecins Sans Frontieres, areas are submerged by floodwaters between Bor and Pibor, seen from the air, in South Sudan.(Photo/AP)
News
November 2, 2019 Ali Mohamed 206 Views 0 Comments

NAIROBI, Kenya–— More than 1 million people in East Africa are affected by flooding after higher than normal rainfall, an aid group said Friday. Parts of the region are bracing for a tropical storm, Kyarr, that could worsen an already dire humanitarian situation.

The International Rescue Committee said many people had been reeling from an earlier period of severe drought. Now the rains in parts of Somalia, South Sudan and Kenya are expected for another four to six weeks.

“We desperately need help here from anyone who can help us, things are bad, and help needs to come fast before it is too late,” said Mohamed Hassan, one of thousands of people displaced in Beledweyne, Somalia.

The flooding in Somalia, which has caused several deaths, has displaced more than 180,000 people and destroyed crops, the aid group Action Against Hunger said. It estimated that the tropical storm would bring another meter of water to parts of the region.

“For many people, this is the worst flooding in a lifetime,” the group’s regional director Hajir Maalim said, adding that food is no longer reaching many people with roads and bridges submerged.

In Kenya, government spokesman Cyrus Oguna said 38 people have died as a result of about a month of flooding. The torrential rain is uncommon for this time of year, he said. Experts have said the changing weather patterns have a huge impact because close to 100% of the country’s agriculture is rain-fed.

In South Sudan, President Salva Kiir this week declared a state of emergency in 27 counties because of the flooding. The United Nations has said entire communities in some areas have been submerged, disease is spreading and access to health services is limited.

People in many of the areas already faced acute malnutrition as South Sudan emerges from a five-year civil war. “I am extremely concerned about the humanitarian consequences of the floods,” said Alain Noudehou, the U.N.’s humanitarian coordinator in the country.

Experts called the floods a worrying sign of how climate change is affecting already vulnerable communities.

“The floods are getting worse and they’re happening more frequently,” said Nhial Tiitmamer, director of the environmental and natural resources program at the Sudd Institute, a South Sudanese think tank.

The floods there are the heaviest in six years in terms of the depth and the extent of the area affected, he said.