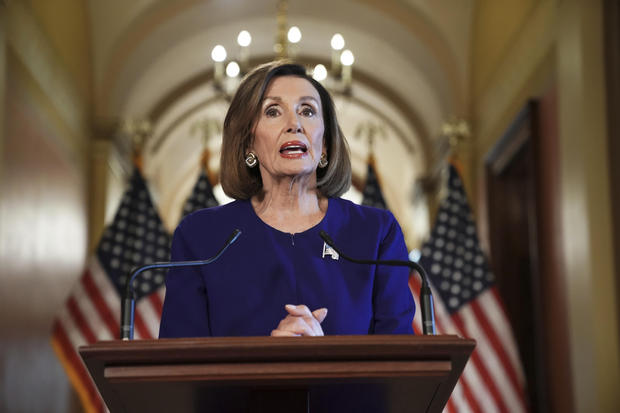 Washington, DC—Speaker Nancy Pelosi announced the House is launching a formal impeachment inquiry into President Trump, setting up a dramatic constitutional clash just over a year before the presidential election.

“Today I’m announcing the House of Representatives is moving forward with an official impeachment inquiry,” Pelosi said in a scathing statement at the Capitol late Tuesday afternoon.

The speaker has long resisted calls from many progressive lawmakers to initiate impeachment proceedings against the president, but Democrats appear to have reached a breaking point over the administration’s refusal to hand over a whistleblower complaint related to Mr. Trump’s interaction with a foreign leader.

“This week, the president has admitted to asking the president of Ukraine to take actions which would benefit him politically,” Pelosi said. “The actions of the Trump presidency revealed dishonorable facts of the president’s betrayal of his oath of office, betrayal of national security and betrayal of the integrity of our elections.”

The current furor stems from a call Mr. Trump made to the president of Ukraine in July, in which he admitted discussing Joe Biden in the context of fighting “corruption” in the country. Mr. Trump and his allies, in particular personal attorney Rudy Giuliani, have accused Biden of pushing for the ouster of a Ukrainian prosecutor while he was vice president in order to benefit his son. The prosecutor was widely seen as corrupt, and no evidence of wrongdoing by Biden has emerged.

One after another on Monday and Tuesday, Democrats from vulnerable House districts who had been resisting previous calls for impeachment came out in favor of initiating impeachment proceedings, citing concerns over Mr. Trump’s potential pressuring of a foreign leader to investigate a domestic political opponent.

The president directed his acting chief of staff to hold off on releasing nearly $400 million in military aid to Ukraine shortly before the call in July, according to a senior administration official with direct knowledge of the administration’s actions.

Mr. Trump, who is in New York for the opening of the United Nations General Assembly, reacted angrily to Pelosi’s statement, calling it a “total Witch Hunt!” Earlier in the day he said he would release the transcript of the call with Ukrainian President Volodymyr Zelensky that is part of the whistleblower complaint.

“You will see it was a very friendly and totally appropriate call. No pressure and, unlike Joe Biden and his son, NO quid pro quo!” the president tweeted Tuesday afternoon.

That concession, however, appeared unlikely to temper Democrats’ demands for the complaint itself. Congressman Adam Schiff, the Democratic chairman of the House Intelligence Committee, said the whistleblower wants to testify before the committee. Schiff tweeted that the whistleblower’s testimony could come “as soon as this week.” — Stefan Becket