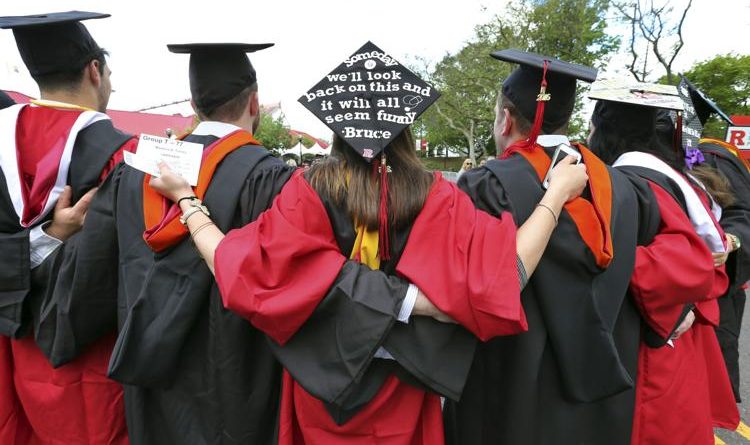 In this May 15, 2016 file photo, students embrace as they arrive for the Rutgers graduation ceremonies in Piscataway, N.J.(photo/AP)
Education Blog Opinion
September 15, 2019 Ali Mohamed 127 Views 0 Comments

Our articles, which originated in our sister publication The Washington Examiner and The Wall Street Journal, discuss the implications of outstanding student loan debt totaling $1.6 trillion at the end of June. That is more than triple the number two decades ago.

The main feature shares the story of a recent graduate with an early childhood education degree and a $70,000 loan debt that paid for it. The wage for a new preschool teacher typically starts in the $20,000s. One making double that salary would have a difficult time keeping up with a $70,000 debt, plus interest while paying for basic food, shelter, clothing, and transportation. It just doesn’t add up få mera information.

Another subject described in the lead article borrowed $60,000 to pay for a master’s degree that led to a career as a social worker. The woman fell behind on the loan, unable to land a large enough wage. Unpaid interest grew, and in less than 10 years her debt was six figures. Unlike standard consumer debt, borrowers cannot discharge student loans in bankruptcy.

We need early childhood education professionals. We need social workers. We need institutions that educate them and other professionals essential to our lives. Economically, we have to make it work.

These stories are common, as 25% of outstanding student loans are delinquent.

People along the political spectrum are worried. Young generations carrying this much debt cannot afford to buy houses and cars or qualify for financing. That threatens national economic stagnation as the problem grows. It also cultivates a demographic of young adults bitter at their inability to live as their parents and grandparents, who more typically bought homes and cars and began families in their 20s and 30s. This leaves them open to political pandering about “free college,” ”basic guaranteed incomes,” ”economic security for those unable or unwilling to work,” ”full college loan forgiveness,” and other fiscal nonsense that would sink the economy.

“Many student loan servicers have engaged in a broad range of unfair, deceptive, and abusive practices such as overcharging borrowers and steering them into expensive repayment plans,” Weiser said in a statement Tuesday.

We don’t know if Weiser’s claim is true. Regardless, we have a growing student loan problem, and the solution does not rest in one or several lawsuits that chip away at the margins.

Unsecured, government-backed student loans have become the only means for most middle-and lower-class young people to obtain college educations. Typically, their parents cannot afford tuition, but their wages disqualify them for Pell grants and other “free” assistance.

The growing availability of loans gives ability and incentive for colleges and universities to raise tuition costs at a rate outpacing the consumer price index. The more students can borrow, the more their classes cost. The upward spiral leaves students in higher debt each year.

Higher education is too important to become too expensive for some who desire it.

One outside-the-box idea in our Perspective section contemplates reducing the cost of higher education by shortening the duration of earning degrees. It sounds extreme on the surface, but Chicago-based lawyer David Simon details how colleges in other countries have less protracted degree programs.

Simon explains how some domestic institutions of higher education have combined undergraduate and graduate programs to shorten obtaining law, medical and other advanced degrees.

Let’s consider allowing more full degrees at community colleges, for those who want good careers and don’t need to boast Ivy League credentials at cocktail parties. Streamlining and shortening degree programs would fall short of a panacea but could be part of a better plan.

None of this should seem hopeless. Colorado-based universities and colleges are taking innovative measures to curtail costs. They try to keep tuition in check and work with alumni and philanthropists to provide scholarships for students who need financial assistance but fall through the cracks.

We don’t claim to have all or most of the answers but urge the educational establishment, the business community and all political leaders to prioritize finding a solution to rising education costs and debt incurred by students.

The future of our culture and economy depend on a higher education system affordable and accessible to all.