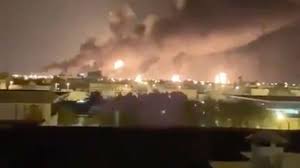 President Trump said Sunday that the United States was prepared to respond to the devastating attacks on two oil installations in Saudi Arabia that halved the state oil company’s production output, while Iran rejected U.S. accusations that it was responsible.

“There is reason to believe that we know the culprit,” Trump said in a tweet Sunday evening. He said the United States was “locked and loaded depending on verification.”

Trump did not name Iran, as Secretary of State Mike Pompeo had on Saturday, nor specify whether he was contemplating a military response. He said he was waiting to hear from the Saudis on “who they believe was the cause of this attack, and under what terms we would proceed!”

His administration was contemplating what U.S. officials characterized as a serious military response, though some in the Pentagon were said to be urging restraint. The officials spoke on the condition of anonymity to discuss internal deliberations. Trump met with Defense Secretary Mark T. Esper on Sunday afternoon.

Oil futures jumped Sunday evening as markets opened for the first time since the attacks. The price of Brent crude surged 18 percent before falling back to 12 percent; the U.S. benchmark West Texas intermediate climbed 12 percent before easing to a 10 percent gain. Trump said he had authorized the release of oil from strategic reserves, “if needed,” to blunt the market impact of the attacks.