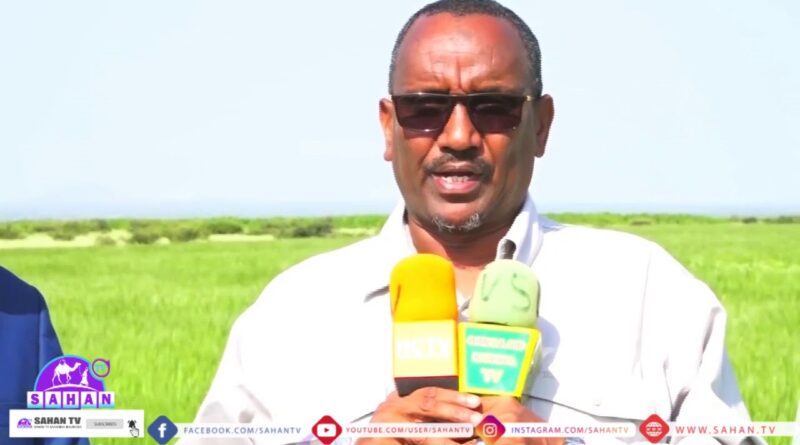 The time has come for Ahmed Muumin Seed, Agriculture Minister to go. The damage he has done to Somaliland Agriculture the country can’t ignore anymore. His decision to give a whopping 2,000 hectares of Wajaale Plains, the best agricultural land, to a sham Chinese company  to grow Castor beans without the consent of local communities, without environmental studies on the impact on land and the livelihood of communal farmers, was truly reprehensible , if not a criminal.

After a fierce public pressure from affected communities and activists,  the Bihi administration rescinded the Chinese Wajaale Plains farm project. This is welcome news for the communal farmers in Gabiley, but Somaliland people would like to know why the Agriculture Minister gave that land to an unknown Chinese company, in the first place?

Under his watch, the Ministry of Agriculture never did proper vetting and through investigation of the Chinese African Agricultural Development Company, or even verified whether it existed.

Gubanmedia researched the Chinese company and found no record of such company showing up.

Up to date, no contract is available to the public about the Chinese farm project in Wajaale Plains. We do not know whether a legal contract existed, and even if it existed Mr. Seed never made it available to local communities affected by such agreement or to the media. The secrecy surrounding the Wajaale Plains  Castor Beans farm project did irreparable harm to government accountability and transparency, increased the likelihood of corruption,  and people suspecting fraud on Ahmed Muumin Seed and a local agent of the Chinese company.

According to Somaliland Chronicle,  Abdullahi Abdi  Mousa, who used to run a hotel  located on  the flood prone area of Hargeisa,  brought the Chinese to Somaliland.Mr Mousa indicated  that Castor Beans project will create 200 jobs for the local people, help food production, which was a hoax. Castor Beans is not a food crop.

While he was showing the Chinese company to Wajaale Plains, he displayed a disdain toward the local farmers. He said that the local farmers have not been using the land to its potential. “ From Kala-baydh up to here, there was just empty land where people  settled and no one had utilized the land.”

But it is the dereliction of his duty that has caused harm to the local farmers in Gabiley region or elsewhere: Whether it’s for failing to providing them crop protection, fertilizers, or farm machinery, or fighting the locust, under his leadership, the Ministry of Agriculture was AWOL.

The only solution for the conundrum of Wajaale Plains is first to remove the  military  from that fertile land and give back  to the rightful owners of the Wajaale owners—-Gabiley communities, and let them manage the land, and grow food and vegetables to feed for their own families and the country. The government should support that effort by developing groundwater in the aquafiers so hardworking people can grow food, instead of the government selling their land to the foreign investment scammers.

The local communities are saying that Wajaale Plains is not for sale or open for investment of the scammers or fraudsters. Ahmed Muumin Seed has repeatedly brought Wajaale Plains purported investors year after year showcasing it as it was government land. This charade of bringing fraudsters to Wajaale Plains must stop now.

This prime agricultural land should only be used to grow crops such as corn or wheat, which can then be processed locally into flour and bakery products to create more jobs for the youth, and help our food security.For instance, companies such as Boodhari Mills or any other commodity food traders should also be given an incentive to develop Wajaale Plains

In the past, Gubanmedia.com has serious reservations  about  Ahmed Muumin Seed as Minister of Agriculture—-a man with zero government experience or agricultural experience , with a standard eight level education  whose chief credential was being Wadani party’s loyal apparatchiks. In fact, Bihi was wrong, in the first place, to appoint him as Agriculture Minister.

Ahmed Muumin Seed has to go because Somaliland deserves better. But it is unlikely for Bihi to fire him because of the pandering to Borama constituents. And that is bad for Somaliland, for the agriculture and for the local farmers. Bihi should do the right thing and put nation over his re-election efforts.

More importantly, President Bihi should have to explain to the public why such blatant fraud happened under his watch because “The buck stops at his desk.”