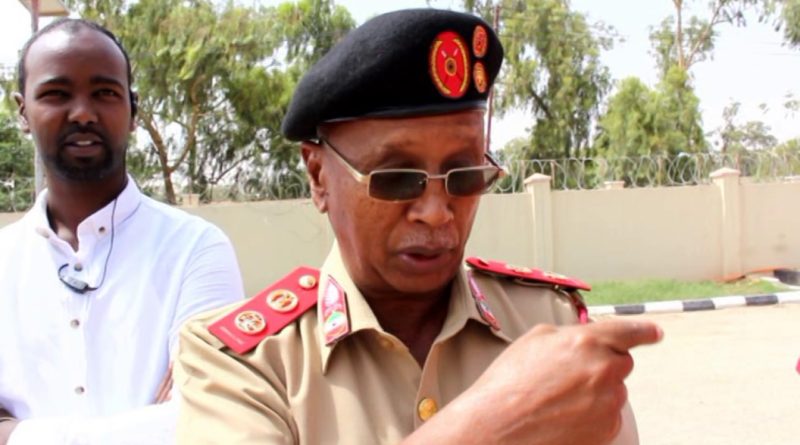 Lewsi Center, Ohio—The time has come to stand up for Somaliland. President Bihi should not cave in the demands of Somalia apologists who are calling for the resignation of Somaliland military commander, Gen Taani, because of the candid remarks he made during a press conference. And, if Bihi fires Gen. Taani, not only it would embolden Somalia apologists, but it also would do great damage to the military institution Gen.Taani worked so hard building and nurturing, for the past two decades.

On Sunday, Gen.Taani held a press conference at the headquarters of Somaliland army in Hargeisa. During the press conference, Gen Taani covered about two issues: The eastern Sanaag militias which have repeatedly switched sides, for clan identity, and finally joined with Somaliland deniers, and the renegade Col Aare, who deserted from SL army, and still hiding in the mountains of Sanaag region.

Gen.Taani was candid about how eastern Sanaag militias have failed to integrate into SL army. Somaliland was simply paying them not to join with Somaliland deniers. This strategy of paying local militias is costing money, but is part of securing and winning peace in the contested eastern Sanaag area. But, for now, according to Gen Taani, Somaliland is longer paying any militias, if they are not performing or taking part any services for the country.

During the press conference, Gen. Taani also addressed the peace efforts led by HY clan elders to mediate between Somaliland government and the renegade Col. Aare. Gen. Taani was frustrated by the lack of progress on the peace negotiations. He even suggested Col Aare deserved to face justice or even the death penalty because of the allegations that he executed four civilians in the Sool and Sanaag regions.

Col. Aare was arrested, but was never court marshalled on those charges. But Gen. Taani did not explain why former  Silanyo administration let Col Aare back into active duty, if he was an accused murderer, in the first place?

Did military open any investigation into the allege crimes Col Aare committed?

Here are the facts. Col. Aare left his military post in Sanaag region, and went AWOL, last year. While being AWOL from his post, he took up arms against Somaliland. He is not a hero fighting  against njustice, as some unscrupulous politicians and clan elders are suggesting. He is a deserter and a traitor. He also e gave aid and comfort to Somaliland’s enemy.

Gen. Taani got it right for calling out that Arare did give aid and comfort to Somaliland’s enemy. He should be held accountable for his actions. However, there are some politicians or clan elders, who are normalizing Aare’s conduct and behavior for political gains or to undermine the integrity of the Somaliland army

Bihi still is advocating for peaceful solution to the manufactured crisis in Sanaag region. The HY clan elders were leading efforts to mediate the standoff between SL government and renegade col. Aare.

However, Somalia apologists would take advantage politically on Taani’s candid assessment about Sanaag standoff. The HY clan elders are having a field day to capitalize on Gen. Taani’s remarks.The war of words  of HY clan elders against the Bihi administtration has already started. They even advocating for violence and lawlessness. And, they’re also demanding the resignation of Gen Taani, but Bihi should not cave in to their frivolous demands.

Nothing will satisfy these Somalia apologists clan based opposition, and even if the Bihi fires Gen. Taani. Tomorrow, they will demand the resignation of our veteran Interior Minister, Col. Kahin and so on. Their ultimate goal is not about Taani’s resignation, but to takedown the Bihi administration, to do the bidding of the corrupt Somali government, and to make Somaliland the sixth fictional federal state.

Bihi as a Commander in-chief  must act and stand up for Somaliland. He should make clear unambiguously to the Somaliland people that he has confidence in Gen. Taani, and that he supports him as the commander of the national army.

Gen Taani has served and fought well for our country.He and others have made rag-tag clan militias into a well disciplined fighting force that is protecting this young nation and securing the peace. Under his command Somaliland territory had expanded. The rank and file of the army loves him. He’s the longest serving military chief of staff the Somaliland army has ever had. We want to thank him for his service and dedication.

General Taani stands for Somaliland, and he deserves to lead our military—the only institution that is serving and protecting effectively for the people of Somaliland. Doing so otherwise is not only a reckless, but it would give in to Somaliland deniers.