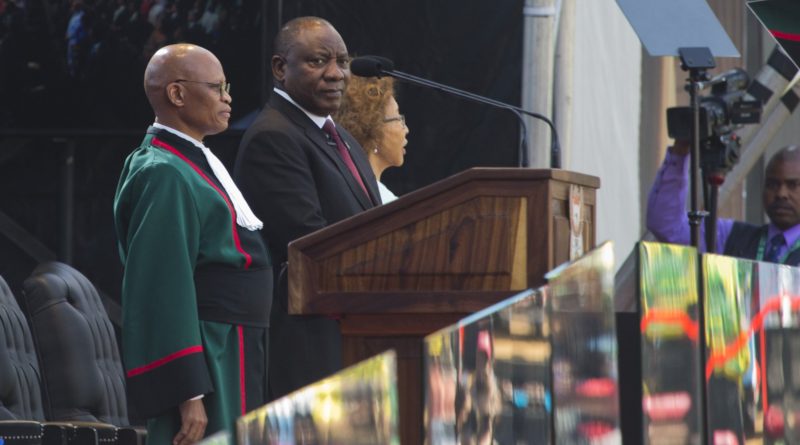 PRETORIA, South Africa  — South African President Cyril Ramaphosa on Saturday urged the country to pursue “an extraordinary feat of human endeavor” as he was sworn in for a five-year term with a delicate fight against government corruption ahead of him.

“The challenges our country face are huge and real. But they are not insurmountable. They can be solved. And I stand here today saying they are going to be solved,” Ramaphosa told some 30,000 people in the capital, Pretoria, with several African leaders in attendance.

He promised a new era in which officials will improve the lives of South Africans instead of enriching themselves. He called for a state free from graft and “resources squandered,” and urged fellow citizens to end poverty in a generation. Both would be immense achievements: Corruption and mismanagement have consumed billions of rand, and South Africa is the world’s most economically unequal country .

Ramaphosa’s inauguration followed his ruling African National Congress party’s 57.5% victory in this month’s election. It was the party’s weakest showing at the ballot box since the ANC took power at the end of the harsh system of racial apartheid in 1994, as voter turnout and confidence fell.

Ramaphosa first took office last year after former president Jacob Zuma was pressured to resign amid corruption scandals that badly damaged public faith in the ANC. A former protege of South Africa’s first black president, Nelson Mandela, Ramaphosa is seen by many as having the potential to clean up both the government and the ruling party’s reputation. Without him the ANC likely would have received just 40% of the vote, one party leader, Fikile Mbalula, has said.

There was no sign at Saturday’s ceremony of Zuma, who has insisted he did nothing wrong and that allegations are politically motivated. His allies within the ANC leadership pose a challenge to Ramaphosa as he pursues reforms.

Ahead of the election Ramaphosa apologized to South Africans for the political turmoil. He also vowed to continue the fight against graft that has hurt the country’s economy, the most developed in sub-Saharan Africa.

The president’s resolve to impose clean governance will be tested with the appointment of his new Cabinet in the coming days. He faces pressure from opposition parties and civil society to reduce the number of ministers — there are now 34 — and appoint ones who are scandal-free.

In a sign his efforts are working, former deputy president David Mabuza was not sworn in as a member of Parliament due to an incriminating report on him by the ANC’s integrity commission. For now, Ramaphosa is without a deputy.

In his speech on Saturday the president also addressed public frustration with joblessness, patchy delivery of basic services and the legacy of inequality. Unemployment is above 25% and much of the country’s wealth and private levers of power are held by the small white minority.

“Many South Africans still go to bed hungry,” Ramaphosa said. “Many live lives of intolerable deprivation. Too many of our people do not work, especially the youth.”

One challenge for the president in the years ahead is engaging potential voters in South Africa’s “Born Free” generation , who never experienced apartheid and unlike their parents see the ANC not as a party of liberation but one expected to deliver for the future.