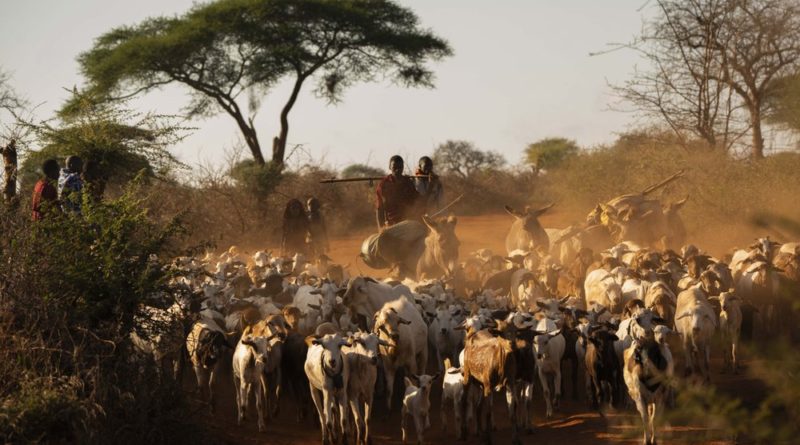 LOIBOR SIRET, Tanzania (AP) — Saitoti Petro scans a dirt road in northern Tanzania for recent signs of the top predator on the African savannah. “If you see a lion,” he warns, “stop and look it straight in the eyes — you must never run.”

Petro points to a fresh track in the dirt, a paw print measuring nearly the length of a ballpoint pen. He walks along a few more yards reading tracks the way an archaeologist might decipher hieroglyphics, gleaning meaning from the smudges in the dust. A large male passed here within the past two hours, he says. “Here he’s walking slowly, then you see his claws come out in the tracks. Perhaps he’s running after prey, or from something else.”

The tall, slender 29-year-old is marching with four other young men who belong to a pastoralist people called the Maasai. Beneath the folds of his thick cloak, he carries a sharpened machete. Only a few years ago, men of Petro’s age would most likely have been stalking lions to hunt them — often, to avenge cattle that the big cats had eaten.

But as Petro explains, the problem now is that there are too few lions, not too many. “It will be shameful if we kill them all,” he says. “It will be a big loss if our future children never see lions.”

And so he’s joined an effort to protect lions, by safeguarding domestic animals on which they might prey.

Petro is one of more than 50 lion monitors from communities on the Maasai steppe who walk daily patrol routes to help shepherds shield their cattle in pasture, with support and training from a small, Tanzanian nonprofit called African People &amp; Wildlife. Over the past decade, this group has also helped more than a thousand extended households to build secure modern corrals made of living acacia trees and chain-link fence to protect their livestock at night.

This kind of intervention is, in a way, a grand experiment. The survival of lions — and many other threatened savannah species, from cheetahs to giraffes to elephants — likely depends on finding a way for people, livestock and wild beasts to continue to use these lands together, on the plains where the earliest humans walked upright through tall grass.

Across Africa, the number of lions has dropped by more than 40 percent in two decades, according to data released in 2015 by the International Union for Conservation of Nature, putting lions on the list of species scientists consider “vulnerable” to extinction. They have disappeared from 94 percent of the lands they used to roam in Africa, what researchers call their “historic range.”