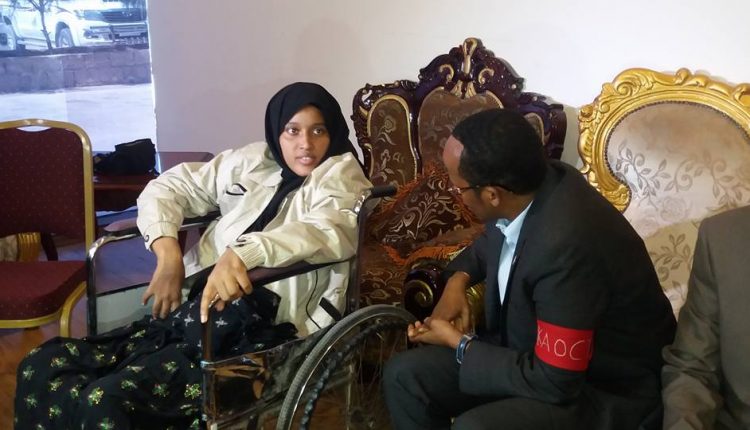 Lewis Center, Ohio–Last October, a member of the Puntland security forces shot Faiza Mohamed Abdi, 16, in the “pelvic area” after she refused his sexual advances in the port town of Bosaso, according to Somali websites.

She has been receiving medical care at Turkish run Erdogan hospital, formerly Digfeer hospital, in Mogadishu, Somalia’s capital. But the local doctors can’t perform the specialized reconstruction surgery required because of the severity of the injuries she suffered in the “pelvic area”, which has a lot of arteries and vital organs such as the bladder, rectum and reproductive organs.

Fortunately, this week, the girl has been flown to Turkey for further medical care. Thanks to the young and energetic Mogadishu mayor, Mr. Thabit Mohamed, who sponsored her trip, including her parents. This is good news, and I hope and pray that everything goes well for her medical care and quick recovery.

It was remarkable for Thabit, who is fighting to keep Mogadishu safe, to get time and effort to help Faiza and her family. Last month, he also helped a child who is suffering from congenital heart disease to get medical treatment in Turkey. He is making a difference in the lives of vulnerable people.

So far, Thabit is the best Mayor Mogadishu has had for a long time: His problem solving and political skills won the support of ordinary Mogadishu residents, who are yearning for leaders like him to tackle the massive problems in Mogadishu such as security, administering justice and providing basic services. He also knows how to use the media effectively.

Since the heinous crime against Faiza took place in Bosaaso and the perpetrator was a Puntland police officer, I decided to write to Puntland authorities, including the Minister of Heath and Ministry of Women Development and Family Affairs, to know more about the facts surrounding this tragic incident.

Although I did not receive any response from them, I asked Puntland authorities three questions:

Why haven’t Puntland authority taken the lead in assisting the medical care of the rape victim and  her family? Second, why Puntland President, Dr Abdiweli Ali, has failed to  reached out the family or to  pay a  visit to give comfort to the girl while she was still in Mogadishu hospital?

I believe his visit or phone call would have shown that he cares about rape victims and is opposed to sexual violence against women and girls.

Some people are alleging that the officer has received assistance from some members of the Puntland police to avoid arrest and to escape to Kismayu, southern Somalia, because of clanism.

Up to now, why have not the perpetrator of the crime and those who aided his escape face justice?

I wish I would not have to cover this tragic story, but someone has to write about the perpetual violence against our women and girls. It is taking place in our households, villages, towns and cities.

Somali men, we should not be complicit or silent about violence against women and girls. For example, Faiza could have been your daughter, granddaughter or sister.

Furthermore, Puntland authorities must bring to justice the officer who shot Faiza in a critical part of her body “pelvic area”. This officer is a thug who does not deserve to escape from justice. A justice Faiza and her family desperately need so she can move on. While in her hospital bed in Turkey, Faiza said, “All I want from the Puntland administration is swift justice.”

Lessons from the sexual violence against Faiza: leadership matters.

Mogadishu mayor’s efforts in helping victims of violence against women show leadership.Those in the International community, who have a vested interest in a peaceful and stable Somalia, should support Thabit in his endeavors to help the residents of Mogadishu.

Because of his involvement, although it will take years, Faiza has a better chance of recovering from that ordeal in Bosaaso. And, I want to thank Thabit for his efforts. Not only Mogadishu residents but Somalia deserves individuals like Thabit to lead the country. He is one of the few promising leaders that has risen from the ashes and chaos of Somalia’s clan-driven violence.

is the Founder and Editor Gubanmedia.com, a 24/7  online magazine of news analysis and commentary about the  greater Horn of Africa region. He can be reached at aliadm18@gmail.com