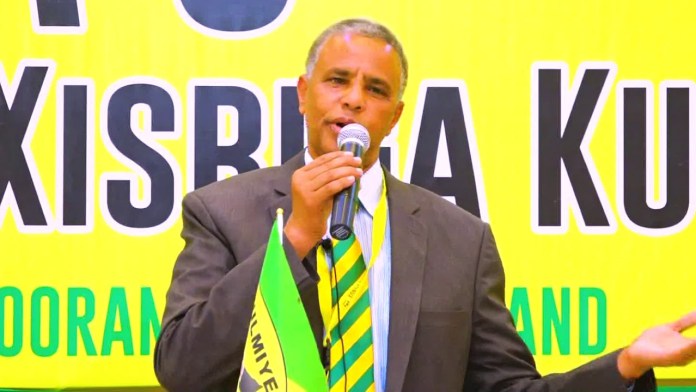 Mr. Mohamud Hashi is a moron and hypocrite, who became rich in Somaliland standard by fleecing Somaliland Civil Aviation Department. He was the inner circle of a small group of mediocre politicians and greedy merchants from East Burao/ Ceel Afweyn that used the Silanyo administration—-the most corrupt administration in the history of Somaliland—-to rob systematically the Somaliland government. That administration had literally looted and embezzled public money, land, buildings, and given away our infrastructures with little or no money.

He left a trail of corruption and graft behind him—which was so immense and devastated the Somaliland government. When he was Aviation Secretary, he allegedly accepted payoff and embezzled agency’s money, including airport, landing and passenger fees, parking concessions fees, and money on expanding the runways. He replaced experienced civil aviation and airport security staff with ignorants from the Ceel Afweyn area.

There were allegations that he siphoned off millions off from Water Augmentation Project known as Humba Wayne, to expand Hargeisa City water supply.

And now, he has the audacity to hold a press conference in Hargeisa, and to badmouth about a democratically elected president of Somaliland, @musebiihi. Only in Somaliland could this type of moron have ambition to run for a president, because of the special fervor some  Somaliland communities  have  on clan identity.

In any other country—-Mr. Mohamud would have been in a orange jump suit in a jail and facing a criminal trial for his alleged crimes of corruption, fraud, embezzlement, theft and abuse of  power, or would have been convicted and in penitentiary serving time for his crimes.

Mr. Mohamud deserves to be held accountable for his alleged misdeeds. We need a special prosecutor to investigate him on allegations of corruption, fraud, theft, and the power abuse, and instigating the communal violence in his home district Ceel-Afweyn. However, Mr. Mohamud is entitled to a due process, a fair trial and his day in court.

But the chance of him facing justice for his allege crimes is slim, because the government has no monopoly on force, or justice.

As far as party politics is concerned, he needs to understand that the Kulmiye Party does not belong to any specific ethnic, clan, religion, region or group. Kulmiye Party despite its flaws is a national party, and the leader of that party is @musebiihi—-the only Somaliland president that over majority of Somaliland people voted for—-close to 54%—that is landslide.

The party titles such as Chairman, vice Chairman, etc are just ceremonial titles— what matters is the party leader, and that person is President @musbiihi.

When Mr. Mohamud was aide to President Silanyo, he adamantly opposed any reforms to open up  the political space, to allow the country to have more political parties other than three monopolistic parties.

Moreover, the current political parties have effectively turned Somaliland into a monopoly system between two rival political parties and whose apparatchiks change roles between and within the parties at will. The manner and the process of electing any party presidential nominee must be open and transparent, and it desperately needs drastic reforms.

During the 2017 presidential elections, not only he campaigned for @musebiihi, but praised candidate Bihi to be a trust worthy and strong leader.

By the way, which of Mr. Mohamud statements we should believe: The statement he’s praising @musebiihi, or the one he’s chastising him after he was expelled from the Kulmiye Party?

Mohamud is a sore loser and spoiler; anything he says is a crybaby. He should learn that politics is nasty, dirty game. Power is never given, it must always be earned. He should move on with his life. Somaliland people would never give him another opportunity to rob public funds.

Does Mr. Mohamud have any future in Somaliland politics? It’s possible but I doubt it, because people hate thieves and hypocrites.But for him, if the doors of Somaliland politics are closed; he still has a chance to be a member of the “Dirta Waqooyi” delegates in the northern Somalia for the new Parliament of the Somali Federal Republic. The bidding war for the selection process of the delegates has started initially at $20,000 at “Bakaaraha Market”. He is a man who has a deep pocket, and he’s able to afford to buy a seat. And fortunately, his Kins-man, Maareeye, the Information Minister, is waiting to welcome him to Mogadishu.

Given his background, he never had a real job most of his adult life, and was living at the expenses of Britain’s tax payers’ money. He has no idea how the real world works. Now, he is suddenly interested in running for the office of Somaliland Presidency. This is a charade.

We can’t afford lawlessness and failed politicians like Mr. Mohamud using clan identity to shield their transgressions, to continue unabated. This madness must stop. The rule of law, justice and accountability must prevail in Somaliland.

Finally, I would suggest to Mr. Mohamud politely to leave the political scene of Somaliland very fast once for all—-because Somaliland people deserve better than his shenanigans. What he’s doing is utterly beyond insanity.