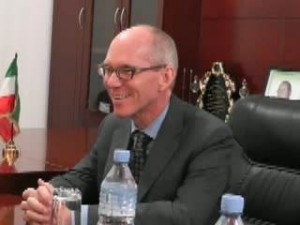 Opinion
June 3, 2019June 20, 2019 Ali Mohamed 273 Views 0 Comments
On Thursday, May 30th, 2019, the United Nations Secretary General appointed Ambassador James Swan of the United States of America, as the new envoy to  Somalia.
Ambassador Swan is a seasoned diplomat with several post across the globe including Somalia. The new UN envoy has an extensive experience in the region, much like the former envoy, Ambassador Nicholas Haysom of South Africa.
The question a lot of analysts are asking is, “What will be the approach of Ambassador Swan to region and how will it differ from previous envoys?”.
In order to answer this question, we must look back at some of the comments made and positions taken by Ambassador James Swan with regard to the Somaliland-Somalia conundrum. These examples were compiled by the Geeska Afrika journal.
On 24th of January, 2012, Ambassador James Swan met with President Ahmed Mohamed Mohamud “Silaanyo” in Hargeisa. The meeting was a formal introduction and part of the efforts by the Silaanyo administration to engage the United States of America. Both parties discussed areas of mutual interest pertaining to security and piracy in the region.
September, 2012, Ambassador Swan held a press conference in Nairobi during his tenure as the plenipotentiary to Somalia. In his press conference the ambassador talked about the nascent talks between Somaliland and Somalia under the tutelage of the then presidents, Ahmed Mohamed Mohamud  “Silaanyo” and Hassan Sheikh Mohamed. The ambassador welcomed the talks and stated that the United States would do whatever it can to encourage and support the discussions.
March, 2013, Ambassador James Swan in a press briefing to the USDOT Somalia remarked “on the achievements made by Somaliland with regard to democratization, security and providing services to its citizens. We applaud the efforts made by the people of Somaliland to maintain peace in the region and to explore new avenues for resolving any lingering political situations with neighboring countries. The United States of America supports efforts by the United Nations, the African Union and the regional countries to find a resolution in the Horn of Africa”.
All these above mentioned comments and remarks were made whilst the Ambassador was a representative of the United States of America, which was in line with the policy of his country at that time. However, the ambassador is now a United Nations envoy, and although there has been no significant change in US policy, which is to support the “federal solution” in Somalia, there is a recognition of the reality on the ground and a understanding for Somaliland’s desire to chart it’s own path.
It is quite clear that Ambassador James Swan has a good grasp of the situation in the region, and it is hoped, in Somaliland, anyway, that he will be given the time and support to further the talks between the two administrations in order to find a lasting and peaceful resolution that will satisfy both Somaliland and Somalia.
Ahmed Kheyre
ruraledcomm@yahoo.co.uk