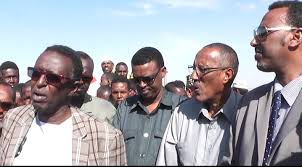 Lewis Center, Ohio—This week, in a poorly shot video,  Mr. Suleiman Ali  aka Ramaah, the former Sahel region governor during the Silanyo administration, was inciting violence. He was calling for chaos and disorder, and he was even threatening to set up road blocks around Berbera port over his false narrative that the Sahel communities are suffering deliberate economic hardship.

Lately, the clan-based websites such as Hadhwanaagnews and others have became the favorite venues to disseminate anti-Somaliland vitriol, which lacks any objectivity or accuracy just to malign Somaliland people and their government.

Mr. Ramaah is the poster child of what is wrong with Somaliland’s governance and political system: He is a high school dropout, turned politician because he simply knew how the political clan dynamics of city of Burao functioned. He met Silanyo during a visit to Columbus, Ohio in 2010. He begged Silanyo’s wife for a position if Silanyo won the 2010 presidential election. Finally, through her recommendation he got the job as the governor of Sahel.

A person like Ramaah should never have been a governor in the first place. But the corrupt Silanyo administration, which had undermined good governance and transparency in Somaliland, enabled him to became a governor, for the sake of cronyism.

Over seven plus years, he was a member of the most corrupt administration Somaliland ever had—-Silanyo/Hersi administration. But Mr. Bihi  fired him last him last year after he  embezzled   government money, abused his power and wrongfully appropriated  public lands in the border town of Wajale, in exchange for bribes.

Right after he was fired from the governorship post, he suddenly switched parties and joined the Justice and Welfare party (UCID).He is the head of UCID on security and interior matters even though he had no law enforcement, legal or military background.

While he was a governor for eight years, he never raised any concerns for the issues and the challenges facing Sahel communities or any other community, or how DP World takeover of the Berbera Port was handled. In fact, Ramaah was the attack dog as well as a cheerleader for Hersi—the de facto leader during the Silanyo administration about his abuses. He was the chief enforcer when Dahabshil tried illegally through a presidential decree, to take over the old Berbera Cement plant.

Lately, the government has been arresting citizens even for minor offenses such as wearing in public places the pale blue tracksuit with the Somali state seal. For Instance, last month, the police and the prosecutor’s office have charged legislator Dhankool,for questioning why we celebrate May 18—our Independence Day. Mr. Dhankool is still in jail waiting for a trial.

But Ramaah what he did was to incite violence and to disturb the peace and stability in Somaliland. What he is advocating for is domestic terrorism. This is our redline. We are not going to tolerate his action to undermine our peace. Advocating for violence is a serious crime.

I believe Ramaah did more damaging offense than Dhankool. Gubanmedia is calling for the Bihi administration to take swift action against those who are inciting violence, including the so called clan elders, social media platforms and failed politicians. Being a member of opposition or clan leader does not give you a blank check to promote violence and mob rule in the country. Peaceful protest is one thing, but calling for the people to take arms is a serious crime. He must be brought to justice and to face the consequences of his reckless rants.

Why is the prosecutor not charging Ramaah for inciting violence? No one is above the law. The rule of law must be prevailing here.

Today, someone like Ramaah who was just a governor, making a base salary around $1,000 a month, could afford to own multiple properties in Burao, Berbera and Hargeisa , is not only troubling but it is also a theft.  Would the attorney General or the Auditor’s office open an investigation on how he accumulated such properties in a very short period of time?

But as long as our political system is based on political leaders who are  pandering to clan identity to promote their own political gain and not party political platform or ideas, thugs like Ramaah not only would thrive, but would also create havoc. It is a dangerous territory, and we must stop this cancer before it destroys the fabric of our young nation.

Gubanmedia.com, which carries news analysis and commentary about the greater Horn of Africa region.

He can be reached alidm18@gmail.com