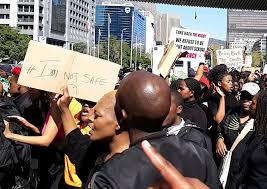 Africa must end violence toward women now. It can only do this through systemic change that lifts women up and recognises their equal role in society, writes Elsie Kanza.

This week’s World Economic Forum on Africa is built around two ideas: Inclusion and growth. This is an honourable starting point for an international summit concerned about building a better future for our region. It is also fundamental to the mission of my organisation. But it will be impossible to achieve for as long as we live in a society where half of the population are treated as a lesser form of humanity to the other half. I am taking about the half I belong to: Women.

We know that when we give women equal chances we not only get stronger economies, we get stronger communities. Where women have equality, we see stronger, more resilient societies. And yet women across Africa are too often the victims of crime at the hands of their own communities and their own relatives. Worse, they are victims of acts that are not even considered crimes.

Female genital mutilation, inter-family violence against women, all sorts of macabre widowhood practices are tacitly accepted in large parts of our region. Women in many parts of Africa are not even allowed to inherit property, which creates a huge economic imbalance. Violence and abuse often start from a young age, when women are at their most vulnerable and least protected.

The creativity and innovation employed to keep African women down is frankly amazing.

Every year, the World Economic Forum publishes the planet’s most authoritative report on the state of global gender parity. It is hardly pleasant reading; globally, the journey toward parity has been getting longer for two years now. The problem around the world relates to the workplace and corridors of power: not enough women are getting into leadership positions. This is starving businesses and governments of new talent and preventing much-needed reforms and policies from getting through.

Africa’s challenge is more fundamental than this: Our women too lack value in society, they lack agency, voice and strength. Equal pay, better promotion prospects and leadership can only happen once they reach the starting line in life.

There are positive signs. Social media has brought a new focus to injustices that have been allowed to go on for too long. There are heroes too: Some states within countries are introducing family laws to tackle violence against women. Others across Africa are putting in place equal opportunities acts. In Ethiopia, half the Cabinet is now made up of women, including the justice ministry.

This week at the World Economic Forum on Africa, 30% of participants will be women. This is the highest proportion ever – more than even our annual meeting in Davos. Among the number of gender-related topics we will be focusing people’s minds on is gender-based violence.

Africa must end violence toward women now. It can only do this through systemic change that lifts women up and recognises their equal role in society. As we bring together leaders from business, government and civil society from all across Africa and even the world this week to plan how to build a sustainable, equitable, inclusive future for Africa there will be no greater priority than building a future where women have the security and freedom to live, work and prosper every bit as much as men.