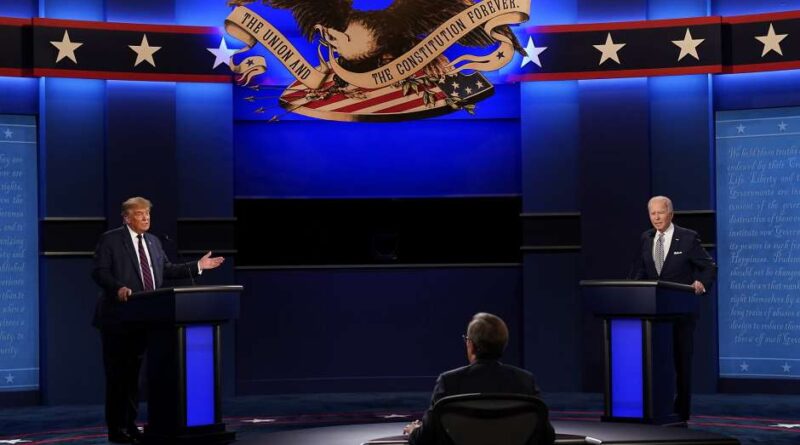 Americans should be saddened, if not angered, by the distressingly unhinged debate between President Trump and former Vice President Joe Biden on Tuesday night.

Some of the blame could go to Chris Wallace, the moderator from Fox News, for failing to take control of a debate undermined by Trump’s constant interruptions and wanton disregard for the time limit. To be sure, Biden occasionally stepped on Trump’s lines, though he generally refrained from taking Trump’s bait.

But most of the blame must be assessed on the president of the United States who was out of control from the start. At one point early on, Biden seemed to be speaking for millions of Americans when he asked the perpetual interrupter Trump, “Will you shut up, man?”

Presidential debates have been a great exemplar of American democracy since 1976, when Jimmy Carter and President Gerald Ford squared off. Some of those debates have been pivotal, some have been less than entertaining, but each has been carried off with a level of substance and decorum that voters want and deserve from potential leaders of the free world.

There were almost too many lowlights to count, most courtesy of Donald Trump.

It was as if Trump were given one last chance to show that he had grown into the job of the presidency, that the gravity of his duties and acceptance of the need to represent all Americans would humble him. He clearly has not. No doubt his supporters may have loved his bully mode, but if there is such a thing as “Trump fatigue” — and if there wasn’t before Tuesday, there is now — it’s hard to imagine his debate performance will gain him any votes.

If anything, Trump validated the prevailing concerns about him. He refused to answer a direct question about whether he would condemn white supremacists. Instead, he riffed about the greater problem with radicals on the left and — most disturbingly of all — suggested the white supremacist Proud Boys should “stand back” and “stand by.”

Even worse than failing to denounce this hate group, Trump just gave them a rallying cry.

On the final question, Trump once again stopped decidedly short of committing to a peaceful transition of power if he were to lose. He repeated unfounded allegations about voting by mail, which is being expanded in multiple stands in response to a pandemic that makes in-person voting a health hazard. “This is going to be a fraud like you’ve never seen,” Trump said.

Biden was clear in his response: Once a winner is declared, “that will be the end of it.”