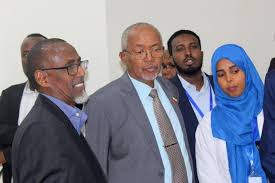 This week, after a long absence from the political scene, Dr Gaboose, a physician turned politician, held a press conference in which he claimed that President Bihi is  corrupt and is running the country like dictator. He also added that Bihi is dividing the nation through clan identity. Dr Gaboose, a Somalia apologist,  did not provide any proof toward smears against President Bihi and his administration. His claims are totally divorce from reality.

There is no  doubt you have heard a lot negative stories about President Bihi and his administration from Wadani party politicians after Cirro lost the 2017 presidential election. And now Dr Gaboose has also joined the fray of well-orchestrated, Somalia apologist’s opposition, who are determine to take down President Bihi  at any cost.

Dr Gaboose said that he decided to hold the press conference after he listened a sermon of Sheik Adan Siro on “injustices”. That is fine. We should listen our clerics for guidance and advice. But how about when the religious leaders become politicians like in the case of Sheikh Siro; do we have to listen or follow them?

Sheikh Adan Siro is an imam at a local Masjid, and he runs a Madrassa near Radio Hargeisa. During his sermons he frequently talks about the state of local politics. However, he is also frequent critic of President Bihi, because he was a supporter of Mr. Mohamed Bihi, former Foreign Minister, during the Kulmiye party 2017 presidential nomination.

During the press confeence, Dr Gaboose’s bizarre talking points in which he borrowed from Prof Samatar was his suggestion that Awdal communities are complaining due of lack fair presentation. Here are the facts: Maybe, Dr Gaboose is suffering from a selective dementia, but I want remind him that the longest serving president of Somaliland was a Gada-Buursi. The person, who has been holding the office of vice presidency, for over two decades, is also a Gada-Buursi. 14 members of the SL legislature are from the Gadab-Buursi clan. However, the Issa community is different story. Issa clan has no zero representation in Somaliland legislature.We should address their legitimate concerns.

Dr Gaboose grew up and thrived during Said Barre era. He started his rise with a close knit relationship with Siad Barre revolution while he was attending the College of medicine in Mogadishu. He was the head of youth revolutionary brigades at the college campuses. He used to spy his fellow students, especially those they perceive anti-revolutionary ‘Kacaan’Diid”. He got advance medical training on neurology from Italy, not because on academic merit but because of his devotion to Siad Barre cause. Upon his return from Italy, he was then hired as one of Siad Barre’s physicians.

After the collapse of Siad Barre, he became Egal administration’s Interior Minister during a tumultuous time in our country. When political parties were introduced in Somaliland, he set up a Salafi religious party, Sahan.But Somaliland voters rejected his party and his values.

On July 2010, after Kulmiye won presidential election, he became Silanyo administration Interior Minister.In early 2011, in efforts to strengthen the local governments, USAID provided funding to Somaliland local governments. Dr Gaboose and scores of Somaliland mayors attended a meeting in Djibouti hosted by USAID for a seminar on local governments. There were serious allegations that Gaboose managed to embezzle  close to $2 million  of aid money intended for development of cities and towns in Somaliland.

Gubanmedia strives to report accurately and fairly. But if f the allegations against Dr Gaboose prove false, we will correct swiftly. Until that we stand that Dr Gaboose is a corrupt, political opportunist who use religion and clan identity, to gain political power.

Dr Gaboose has no heart or compassion, because he charges $50 for a 10-15 minutes visit for patients —who are struggling to feed their kids. He’s immoral and a hypocrite. Therefore, he has no right to lecture us on what is right or wrong.

No question Somaliland has serious problems that need to be addressed: Access to quality education, reducing high maternal and infant mortality  rate, access to clean water and cheap electricity, cracking down the stranglehold the few oligarchs had on our economy, and host more.

What we want also is an honest and accountable government—where the rule of law and justice are maintained. As a free people, we should have an honest debate on how to make our country a better, safer and prosperous place for every Somalilander.

Dr Gaboose should know better that nothing wrong with for a group of people, clans or parties to forge a political alliances to win an election. In fact, winning a free and fair election is not illegal.

But to advocate, as Dr Gaboose is calling, division, sedition and uprising, is a serious offense. That is dangerous. Dr Gaboose is acting like a rogue politician. And if he had any political future in Somaliland, he should tone down his divisive rhetoric

I would admit that the sillanyo administration has left Somaliland in a bad shape economically and socially. But Dr Gaboose you were part of it!! You selectively forgot that! However, Bihi inherited the mess and did not do a good job about cleaning or draining the swamp!

Somaliland needs a a constitutional convention to sort out the short coming of our constitution. We should also need to allow more political parties for the country. Division, clan identity politics, or clan gathering “Shir Beeleed”, would never work.

Finally, my sincere advice to Dr Gaboose is for him to remain as a physician and leave the political scene, because Somaliland has already enough ‘sowers and exploiters of division’.